This is possibly the most-important chart for the global economy. It’s the exchange rate between the world’s two biggest economies; the US dollar against the Chinese yuan.

In the past three days, it’s fallen precipitously, at least by the narrow standards of this pair, which is managed within a supposedly-liberalized band by Beijing.

In the past week, the pair has fallen 1.3% — meaning the yuan has risen against the dollar.

One school of thought is that this is all about the US dollar. The dovish shift at the Fed has given all currencies a relative lift, especially emerging market currencies. China also cut the RRR for banks.

Others see echoes of the 2016 episode of yuan weakness that rattled global markets in an August wave of risk aversion. That led to the so-called Shanghai Accord, which was a real or imagined episode where China agreed to ease in a coordinated move with central bankers elsewhere.

The rumors this time is that the Fed agreed to shift to easier policy in exchange for Chinese officials pushing the yuan higher.

Another idea is that this is part of the negotiating tactics for the US-China trade war. It’s a concession from China to clear the way to a deal and show goodwill. It could be a signal that they will follow this with further stimulus that will boost Chinese demand and, in turn, narrow the US-China trade deficit. 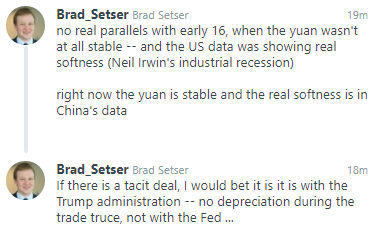